Join us for a programme of pop up global music and dance at Writers Square!

We’ve assembled a wonderful line up of music and dance from around the world, all presented by local artists living in Northern Ireland. Bust a Bollywood move with our South Asian Dance Academy,  explore the beauty of Bulgarian culture or get into the groove with Zimbabwean beats. There’s a little something for everyone!

Experience the traditions of Mexican folk dancing. Mayte Segura is a contemporary and Mexican Folk dancer with a Diploma in dance teaching from the British Ballet Organisation. She has received several times awards from the Arts Council Northern Ireland recognising the quality of her dance work and brings together dancers from all over Northern Ireland to perform traditional Mexican folk dancing.

After beginning their journey busking on the streets of Belfast Anna's Number have continued their journey of becoming the forefront of youth-inspired funk music in the country. Recent achievements include a sold out show in the Lyric, winners of 2019's Banbridge Buskfest and gaining critical acclaim from BCC Radio 4. If you like to dance, Anna's Number is the perfect band for you!

BASORK is a five piece fusion group whose compositions are influenced by Irish, European and Middle Eastern sounds. Brass, Strings and Woodwind combine with hints of jazz, funk and various traditional musics with big melodies and lots of improvisation.

The South Asian Dance Academy (SADA) provide amazing Bollywood & classical performances and workshops throughout the island of Ireland. SADA also works to encourage engagement and participation in traditional and contemporary South Asian dance. The academy works with a diverse group of freelance dancers with varying skills, discipline areas, genres of focus and levels of experience.

Local members of the Chinese community present traditional Chinese fan dancing, which is a centuries old dance style from China. The group is lead by dancer Weihong who performs all over Northern Ireland teaching people about Chinese culture.

Magwere have up until now been one of Ireland's best kept secrets . Fronted by Zimbabwean born singer & percussionist Wilson Magwere, the band formed in Belfast, Northern Ireland several years ago and possess an enviable reputation for delivering performances that crackle with energy. Their music is primarily influenced by Zimbabwean rebel music, but there are elements of funk, reggae & trance also present in the mix. 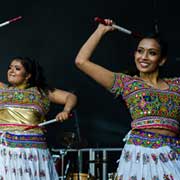 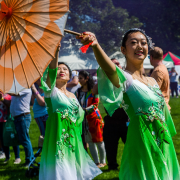 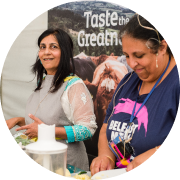 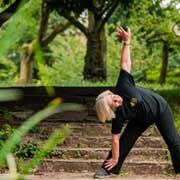 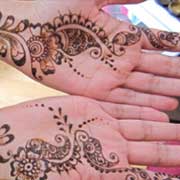 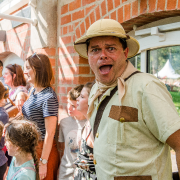 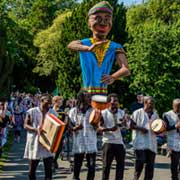 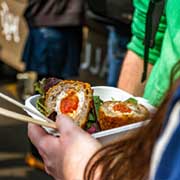